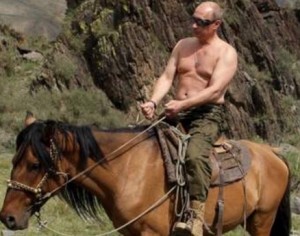 To those who have loved Dostoevsky, Chekhov, Tolstoy, Turgenev, & so many other greats of Russian literature, it is a thrill to hear Vladimir Putin is publishing his collected writings in multi-volume editions. The first three-volume set went on sale last week, regrettably only in Russian, but for only $40 which is a bargain for the richness of thought & language he so often displays–mostly macho blustering & guttural war cries.

There are likely to be throngs lined up at bookstores in Moscow so it’s a mystery why the first run is only 1,000 copies–especially because state-owned Russian polling companies continue to claim his approval rate is 83 percent. That’s even higher than Stalin’s approval scores when the alternative to giving approval was the gulag. But then again, that’s the alternative now.

Dostoevsky would turn over in his grave.

(Photo is Putin where he does his more creative thinking about bombing other countries.)