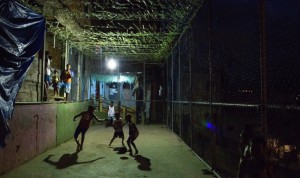 The working people of Brazil–including Indigenes, homeless movement activists, favela residents, students, unions–resisting the FIFA games with such fury do the human race proud. While the government of Dilma Rousseff runs roughshod with public funds, using them as a trough for the oligarch’s “bread & circuses”, working people have made the smooth operation of the World Cup (starting tomorrow) anything but certain.

Now of course they expect to get some of that back from the well-heeled sports tourists who will pay minimum $4,400 for just a five-day stay. The ticket price for each event runs from $220 to $500 so you won’t be seeing many locals at the games. And the swanky tourists won’t be able to buy enough tchotchkes to compensate the public trough.

So this means working people are taking it in the neck so the world’s oligarchs & corporate magnates can have a little fun at their expense. Historically “bread & circuses” worked the other way around: the oligarchs held games to placate & numb the political spirit of the plebeian masses. Now they’re a spectacle to show us who’s really in control & to enforce neoliberal relations of servant & master, serf & lord. Except that the Arab uprisings & the Occupy movement got in the way. And instead of placating, the “bread & circus” fiascos inflame rebellion.

This photo is a soccer field in Mangueira, a favela in Rio de Janeiro. Appropriate sports facilities for kids are important, but health care, education, housing, & just plain eating are more important. And these are all being denied so the Rousseff gang can party while working people foot the bill. Does anyone else hear the sound of revolution?