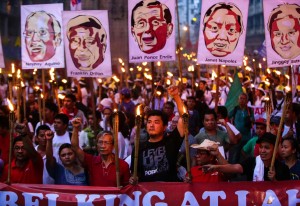 “Good governance” is an obscure term prominent in IMF, World Bank, & UN literature about the management of neoliberalism, especially in the plundered countries. It’s an undefined term because it signifies absolutely nothing–unless baloney has recently acquired meaning. What the term hides is the indisputable reality that neoliberal austerity programs are most effectively operated by corrupt regimes. You cannot have neoliberal plunder in any country by multinational conglomerates without regimes on the take stealing the public coffers blind; without regimes that operate as crony capitalists dishing out government contracts & other perks to family & friends; without regimes willing to ignore laws or rewrite them to more accommodate plunder; without regimes willing to employ riot cops, military, & paramilitary if necessary, to enforce plunder. The IMF & World Bank likely budget graft & coruption right into their loan packages & consider it the price of doing business because the returns from plunder are so astronomical. It’s almost like getting something for nothing.

Many protests around the world, including most currently in Brazil & Turkey, have focused on government corruption. This protest yesterday in Manila, Philippines, is one of a series organized by the Scrap Pork Network, a broad coalition of organizations demanding an end to lump sum allocations from a government discretionary fund dispensed to politicians for pork barrel projects in their districts (small-scale infrastructure or community projects).

The obvious possibilities for theft in such a program have been fully realized, engineered by Janet Lim Napoles, a long-time scam artist & close confidant of president Benigno Aquino, in collusion with several government officials, including Aquino. Napoles is called the “pork barrel scam queen,” a title she apparently wears without shame.

In April, it was estimated that USD $240 million out of a cache of $300 million was siphoned off by Napoles & politicians. It cannot be said the Filipino government is being defrauded since they are the guilty parties; it is the Filipino people who are being ripped off wholesale. The same gang is involved in other lucrative scams, including heisting royalties from the plunder of natural resources.

The protesters are demanding Aquino prosecute all officials, many of whom, like the pork barrel scam queen, are his friends.The banners held aloft here are the accused politicians & constitute a wall of shame.