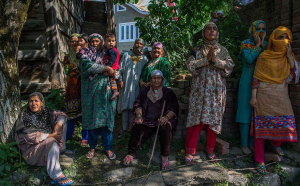 Lest we be misled that protests against the executions of Sabzar Bhat, Faizan Ahmad, & Aaqib Rashid Lone are limited to youth (the most frequent targets of military execution), these women were at the viewing of Sabzar Bhat’s body prior to his funeral services. It is, after all, their sons, spouses, & brothers who are targeted. This is a social revolution against Indian occupation, not a phase that youth pass through in life.

The occupying army anticipated the funeral corteges would be massive & become protests & though it was the first day of Ramadan imposed strict security measures to thwart the groundswell of participation. They imposed a curfew & erected barricades on the roads to the funeral sites along with heavy deployment of troops.
You cannot stop a revolution with barricades. Thousands came on foot from all over the region, detouring around the barriers & chanting independence slogans.

The funeral prayers for Sabzar had to be repeated seven times back-to-back to accommodate the number of mourners honoring him as a freedom fighter. Thousands also attended the funeral of 16-year-old Faizan. There are no reports yet on the funeral for Aaqib.

Our fullest solidarity with the people of Kashmir & our sincere condolences to the families of the three young men. May they Rest In Peace after a life well-lived.