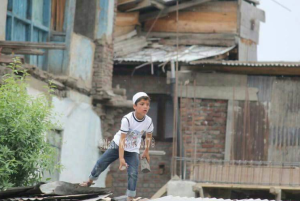 There have been references recently to India’s “dirty war” in Kashmir. Due primarily to media’s use of the term, “dirty war” has taken on a meaning contrary to its intent when it was first used by the Argentine military junta & then US Secretary of State & international psycho killer Henry Kissinger. They used the term for their campaign between 1974 & 1983 to hunt down & execute leftwing guerrilla fighters. It was in fact not just a war against guerrillas but a reign of mass terror which included crimes of unspeakable savagery.

Survivors & human rights activists in Argentina object to the term in no uncertain terms as disrespectful to their children & beloved. Among those who object is Estela de Carlotto, the head of the group Grandmothers of Plaza de Mayo, who said “It was not a dirty or clean war; it was state terrorism.” The objections of these activists to using the terminology of the oppressors should be respected because it was directed against the victims, including guerrillas, & does not signify the criminality of the junta & its murderous ally.
Kashmir is under military occupation which is a reign of mass terror. One only has to read the twitters of Indian nationalists about the executions of the three young men yesterday to see the hatred & violence it spawns & why the anti-occupation movement in India is so weak.

When Indian Army Chief of Staff Bipin Rawat said yesterday “I would have been happy if the protesters were firing weapons at the armed forces instead of throwing stones,” it was a provocation to Kashmiris. He was taunting them to abandon mass social opposition with stone pelting civilian defense guards & return to a strategy of armed resistance so it would be easier for India to portray them as “jihadi terrorists” & no level of military violence to suppress them would be condemned.

This young boy sends terror into the hearts of Bipin Rawat & Narendra Modi because socializing the young into submission is a prepossession of the oppressors from the Black & Latino communities in the US to Kashmir, Palestine, & Arakan state. Standing just beyond the camera in this photo of a young Kashmiri boy are tens of thousands of unarmed protesters who will become emboldened by the violence against them, not terrorized into submission. Sustained mass opposition fortified by international solidarity is the force that will end the occupation.

The struggle of Kashmiris must be fortified by international solidarity so they do not stand alone against the military might & terrorism of the Indian army. Their struggle is our struggle because a victory would resonate around the world & change the relationship of forces to the advantage of the oppressed.