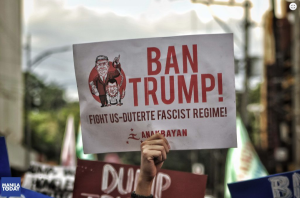 A banner at the November 12th protest in Manila giving the bum’s rush to Trump & to Duterte who did not allow Duterte’s death squad war against the urban poor, martial law & war against Muslims in Mindanao, the Rohingya genocide, or the US remilitarization of the Philippines to interfere with their bonding rituals at the ASEAN summit.

Deepest respect to Filipino activists who never disappoint when it comes to protesting US militarism in the Philippines.