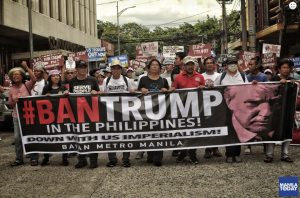 There isn’t a single visit to the Philippines by a US president or official in the past many years that hasn’t been confronted by thousands of protesters. They always defy water cannons & phalanxes of riot police to march to the US embassy where they have burned effigies of Obama & other US presidents. The Filipino antiwar movement has been uncompromising against US presence in the Philippines & does not make lesser evil equivocations when it comes to the remilitarization of the Philippines going on nor has it been taken in by the loud-mouthed protestations of Duterte.

There are many photo albums of protests against Trump’s visit during the ASEAN summit because thousands began protesting even before Trump arrived & continued after he got there. According to media reports, this protest on November 12th included not just Manila political activists but activists, students, working people, urban poor, farmers, tribal leaders, & school children from Mindanao where the Duterte regime imposed martial law & in alliance with US forces has been bombing Marawi city to smithereens in a war against Muslims. While rightwing forces around the world blither on about ISIS in Mindanao, it is extremely significant that the people of the region came to Manila to protest US presence & Duterte’s war.

Our fullest solidarity with the people of Mindanao & with the Filipino antiwar movement.