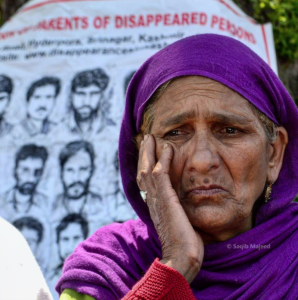 Family member protesting forcible disappearance of Kashmiris in the custody of the Indian occupying army:

According to the Association of Parents of Disappeared Persons (APDP), an estimated 10,000 mostly men & boys have been disappeared since 1989. It is staggering that nearly 360 are disappeared every year which is about one man or boy every day in a relatively small country.

It is a monstrous crime for which grief remains unresolved. These photo montages are a feature of every protest against forcible disappearance around the world.

Parveena Ahangar, the founder & chair of APDP & Khurram Parvez, the program director of Jammu Kashmir Coalition of Civil Society (JKCCS) & chair of the Asian Federation Against Involuntary Disappearances (AFAD) are playing a leading role in exposing this human rights crime used in at least 40 countries. Hundreds of thousands have been disappeared.