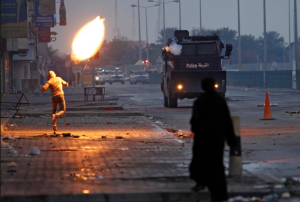 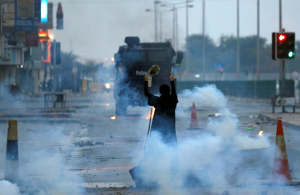 So many mocked the Arab Spring in Tunisia, Egypt, Yemen, Bahrain, Syria (with reverberations in Iraq, Morocco & elsewhere) as orchestrated by nefarious forces. Others wrote jubilant obituaries to the failure of Arab democracy. The undercurrent was a sneering contempt for Arab culture, for Muslims, & the stinking mendacity of racism.

Arab revolutionists in those countries braving extreme repression to commemorate the 6th anniversary of the historic uprisings would like the world to know the revolutions have been delayed but are not vanquished. There’re been some setbacks due to massive bombing, extreme repression, widespread arrests, forced disappearances, torture, executions. Thousands have given their lives & suffered the unspeakable.

But still they rise. What’d we think? That social transformation would come easy? That entrenched power with high-tech armies would just cave? Get real.

These photos are from a protest in Sitra, near Manama, Bahrain on Tuesday, February 14th, the 6th anniversary of the Bahrain uprising. To crush the uprising, early on the king brought in the most sophisticated & brutal super-cops from the US & UK to terrorize the protesters, including with pellet munitions. The top photo is a young men throwing a petrol bomb at an armored personnel carrier come to harass the protesters & which is discharging tear gas canisters. The bottom photo is a woman holding up a photo of resistance leader Isa Qassim to taunt the soldiers.

Until they send us further notice, the revolutions continue & international solidarity must stay steadfast. That includes for Syria against Assad.

(Photos by Hamad i Mohadded/Reuters)

PS: Perhaps it’s worth noting that the same political forces who sneered at the Arab Spring sneer at the youth anti-Trump protests, Women’s March, & protests against Trump’s Muslim ban. Coincidence?