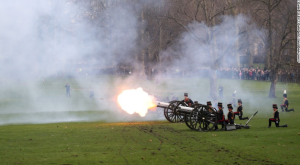 Momentous events have preempted a long overdue update on the doings of Betty Windsor. It should be discreetly reported that Phil’s flatulence problem caused some uncomfortable moments for assembled guests from the aristocracy at the Sapphire Jubilee celebrating Betty’s 65th year on the throne.

Having a senior moment, Betty didn’t remember the King’s Troop Royal Horse Artillery would be giving her a 41-gun salute in Green Park. When it went off in a thunderous volley that rocked the palace, Betty asked, loud enough for all her guests to hear, “Was that you, Phil, or was it one of those damn 41-gun salutes?”

The aristocratic composure of guests was only momentarily disturbed & easily assuaged when Camilla came to Betty’s side & said “Oh get off it. It isn’t that different from hitting the trifecta at the horse track.”