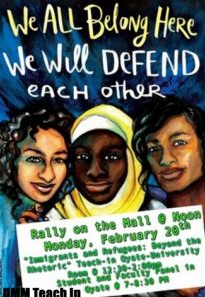 Last month, Dan Demetriou, a philosophy professor at the University of Minnesota-Morris, posted on FB that “leftist-driven” refugee & immigration policies are an “existential threat to the US & other advanced western nations.”

This is what he said: ““100% of illegal immigrants lower confidence in the rule of law & add people & workers & students we don’t need. They on average have IQs lower than natives & low skills. They are harmful to an economy about to automate, especially when it is a welfare state. …”

“And refugees are way worse, as most adhere to a religious-political cult with repulsive values at war with the west from its inception. No country who has taken the current crop of refugees has made it work. No school with many refugees or illegals is a good school. None of their neighborhoods are safe. Not everyone has an extra $100k to avoid them.

“What an insult to our kids, our educators, to suggest for a moment that a 20 yr old, raised in rubble & taught to hate you, gays, Christians, Jews, women’s rights, & western liberalism would be as good an American as your kid.”
—–
Now here’s the good news. His post evoked outrage on campus from students, administrators, & teachers prompting them to organize a teach-in to support refugees & immigrants & he continues to get a lot of flack from around the country.

Here’s what’s interesting about the University of Minnesota at Morris, Minnesota. It began in 1887 as a boarding school for Native Americans called the Morris Industrial School for Indians. This was during the high point of the US army wars of extermination against Indian tribes west of the Mississippi. Minnesota history is filled with gruesome accounts of massacres & forced confinement on reservations. Racism & social control of Indians were part of the curriculum, making them averse to leaving reservations to go there so it never grew & has no illustrious history in the education of Indians.

In 1910, it became a school of agriculture because of its location in a major farming district, & didn’t become part of the U of M system until 1960. Although it is now a liberal arts college, agriculture remains one of its primary orientations because Morris is a center of agribusiness with thousands of Mexican & Central American migrant workers.

The ironies are replete in the statement of this racist meathead. First, that he teaches philosophy but exhibits the cognition skills of a lump of primordial slime; second, that he is the ungrateful interloper on former Indian territory; & third, that the dumb-ass couldn’t eat were it not for the thousands of undocumented immigrants who pick his food.

Like Rania Khalek after him, he screamed bloody murder that he was being victimized & vilified & his free speech denied when people rebutted his racism in no uncertain terms.

This is the poster from the February 20th teach-in at the U of M-Morris in response to Dumb-ass Demetriou.