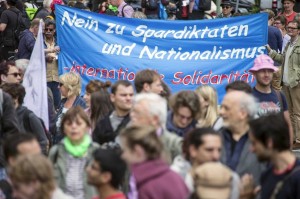 Usually World Refugee Day is a ceremonial event of little value except for those who like empty gestures & symbolic things. But yesterday activists across Europe made World Refugee Day 2015 into one of active solidarity with the hundreds of thousands of refugees & immigrants from Africa, the Middle East, & elsewhere. There were solidarity protests in Spain, Germany, Italy, & several cities in France.

In Berlin, protesters chanted “No frontiers, no nations, stop deportation” &“Say it loud, say it clear, refugees are welcome here”. Banners & chants also protested IMF-European Union austerity measures in Greece, highlighting that the common enemy of immigrants & Europeans is European leadership & the scorched earth economic policies of neoliberalism, the barbaric phase of capitalism. In solidarity with Greece, many waved Greek flags & one poster read, this “technocratic, cold & neoliberal Europe that is led by Germany is unbearable.”

In France, protesters in Paris, including undocumented immigrants, marched behind a banner that read “Greece, France, Europe: austerity kills, democracy is dying, let’s resist”. Others rallied in Menton, near the Italian border, in solidarity with immigrants beaten back by French & Italian border police as they tried to travel north. They also marched in Marseille in the south of France & in Calais where French riot cops are beating back immigrants attempting to cross into England.

In Rome, protesters marched in pouring rain under the slogan “Stop the massacre now”. One pensioner in the march named Luciano Colletta said “We are here to save our Europe, which includes immigrants, refugees & Greece. Europe must belong to everyone, not just to the Germans & the banks,”

There were small nationalist, anti-immigration rallies held in some places & these will only grow if not overwhelmed by the mightier forces of human solidarity standing with refugees under a banner emblazoned with the iron law of social transformation: “An injury to one is an injury to all.”

The only way to honor the solidarity movements in Europe is to build strong ones in our own countries because today immigration is an international crisis & will continue to be so because neoliberalism just can’t help itself. Scorched earth economics holds private profit as god & humanity as fodder–or dispensable.

Immigration is a human right! Open the borders! Salute & solidarity to our European & immigrant brothers & sisters!

Photo is the protest in Berlin.