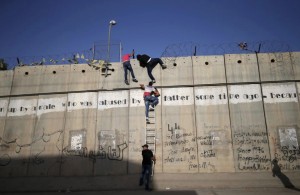 In Israel’s ongoing campaigns to fabricate religious traditions at Muslim holy sites, they are trying to reclaim & destroy the Al-Aqsa mosque in Jerusalem. For a few years now they have debarred Palestinian men under 50 years old from entering the mosque. Worshippers have to kneel in the public streets while sightseeing groups are allowed to tour & Zionist thugs vandalize.

Israel heralds itself as the only democratic country in the region. Possible to have freedom of religion–a touchstone of modern democracy–in a Jewish-only state? The Al-Aqsa age ban on men speaks for itself.

As the former Soviet Union & other repressive regimes have learned, you cannot repress out of people their most cherished & committed beliefs. It is an abomination to prevent people from worshipping as they choose.

These Palestinians scaling the apartheid wall are crossing from a village near Ramallah in the West Bank to attend Friday prayer for Ramadan at Al-Aqsa in Jerusalem. This is Israel’s version of democracy & freedom of religion.