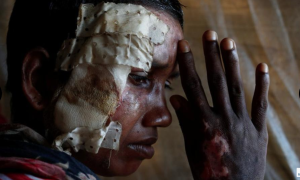 The pope’s visit to Burma is just bad business all the way around. General Min Aung Hlaing, head of the Burmese military & architect of the Rohingya genocide, met with Pope Francis at Cardinal Bo’s residence not long after the pope landed in Yangon. The general reported on FB that he told the pope that Burma “has no religious discrimination at all.” It isn’t reported what the pope responded to Hlaing–& therein lies the problem. What do you say to a guy who is orchestrating the torching of villages, rape, torture, executions including of small children, burning people alive? More importantly, what should a spiritual leader say to a genocidaire? Most people wouldn’t want to shake the general’s blood-drenched hand or show him any kind of respect but the the pope exchanged presents with the general. The pope should have headed straight from this unsavory meeting to an exorcist or at least to confession.

Tomorrow, the pope will move on to the capital city Nay Pyi Taw to meet with Suu Kyi, other political figures, & Buddhist officials. Thursday he’ll fly on to Bangladesh to meet with Bangladesh’s Catholic cardinal & politicians but he has not scheduled a visit to Cox’s Bazar to meet with Rohingya refugees. What’s wrong with that picture? Is this papal visit to show solidarity with the Rohingya people or solidarity with the fascist junta? It’s a reasonable question & not impertinent at all.

Kenneth Roth from Human Rights Watch tweeted “We’re all waiting for the Pope to say the R word.” Other media sources from the NY Times to Al Jazeera are asking “Will he say the incendiary name?” What kind of Mickey Mouse spiritual operation is the Vatican running when it plays coy & tiptoes around the issue of genocide? Has it no moral bearings that make it able to distinguish right from wrong or compels it to speak out against such monstrous crimes? Is it a religious institution or a political operation that talks morality & compassion but runs interference for genocidaires & pedophiles?

Pope Francis delivered a message to the people of Burma before his trip saying he was coming to proclaim the gospel of Jesus Christ & deliver a message of ‘reconciliation, forgiveness, & peace’. Who’s he talking to in Burma with that kind of nonsense? How can one speak of reconciliation & forgiveness while the military is engaged in a genocide? You can go through the New Testament with a fine tooth comb & won’t come up with justification for that kind of compromise. We should not hold Pope Francis to a lower standard than we hold anyone when it comes to human rights & we should be able to hold him to the gospel he purports to proclaim. If that seems too harsh a judgement, consider that 95-percent of the underground Rohingya reporting network in Arakan state have gone missing, that nearly a million Rohingya have been displaced to refugee camps, that the military is still engaged in unspeakable violence against the Rohingya, & that thousands may be forced back to apartheid, concentration camps, & continuing genocide in Arakan state.

Photo is 30-year-old Momtaz Begum at a refugee camp in Bangladesh. She is who Pope Francis should be talking to; not the genocidaires.