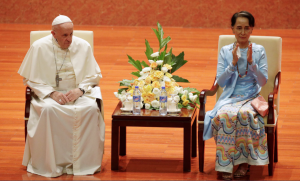 We don’t have to go all ecumenical & drum up excuses for why Pope Francis went to Burma in the midst of the Rohingya genocide or for why he spoke alongside Suu Kyi in banal platitudes with no reference to the Rohingya people. Vatican officials don’t seem the least embarrassed reporting that in his Yangon meeting with religious leaders from different faiths he never even euphemistically alluded to the Rohingya. Nor did he say a word about them & the genocide against them when he spoke on a podium with Suu Kyi. Some offer the lame excuse that by dodging the Rohingya Muslim genocide Pope Francis was protecting the 700,000 Burmese Catholics from persecution. Every Catholic school kid learns in catechism class about the early persecution of Christianity & about the martyrs & saints who stood up to it. Sniveling & cowering before persecution was not how Christianity survived. There is no dignity nor respect due Pope Francis for politicking with genocidaires.

Refusing to use the name Rohingya or to speak in no uncertain condemnation of the genocidal offensive against the Rohingya people wasn’t Pope Francis being politic to protect Catholics from persecution in Burma. It wasn’t even a capitulation to the fascist junta. It was an honest expression of the pope’s politics as he has played them out in Palestine, Syria, the Philippines. It’s time we stopped falling for his humble-pie schtick & that Catholics demand he start acting like a spiritual leader rather than an apologist for criminality & genocide. The entire world was watching Pope Francis including politicians, diplomats, & governments trying to weasel out of economic & military sanctions on Burma. He blew it because his loyalties are with the junta just as they are with Israel & with Assad in Syria.

It’s reported that while in Bangladesh the pope will meet with a small delegation of Rohingya refugees “in a symbolic gesture.” Symbolic of what? Collusion with the fascist military junta at the expense of human rights for the Rohingya people?

Shame on Pope Francis. But at least now we know where he stands on justice for Muslims & on genocide. People who mistake words for deeds have nothing to explain away his collusion with genocide in Burma.