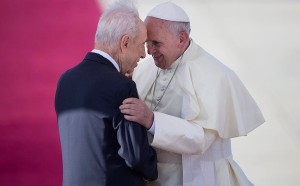 If my criticisms of Pope Francis offend, I’m sorry for that but I’ve been a relentless critic of his since his 2014 trip to Israel–& in particular about his silence on the carpet bombing of Gaza. For me, that Hail Mary at the apartheid wall didn’t cut it. Nor does his call for a bantustate for Palestinians compensate for his refusal to condemn Israel.

I would hardly call myself a friend of the Vatican but I am not anti-Catholic. It’s the religious tradition that shaped me & that most of my family is committed to.

I just refuse to hold political or religious leaders to a lower standard of human solidarity than I hold myself or others. I know the Gospel says the word before the deed, but to me, if words & deeds are not in accord, then words have no meaning. So to me, it is the deed before the word.