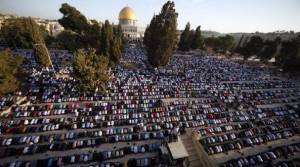 Al-Aqsa mosque in Israeli-occupied East Jerusalem remains under siege by Israeli troops. Last week, during the celebration of Eid al-Adha, a Muslim high holy day, Israel continued to ban males under the age of 50 from worshipping in the mosque. This photo is those denied entrance worshipping in the plaza surrounding the mosque.

Using violence to deny people the expression of their most heartfelt religious commitments, especially during the holiest days of the year, is a monstrous violation of human rights & religious freedom.

Haaretz reported there were clashes again today between Israeli soldiers & police against Palestinians defending the mosque with stones, paint bombs, “fire bombs & fireworks.” They also claim Palestinian youth barricaded themselves in the mosque. It’s remarkable courage on the part of the youth since Israel recently instituted a 4-year minimum sentence for stone-throwing. Zionist settlers can torch Palestinian homes & mosques, poison water wells, & assault Palestinians with impunity but a rock will get a Palestinian kid 4 years in the gulag. There wouldn’t have been any problems at all at the Noble Sanctuary if Israel weren’t provoking it by sending troops to a place of worship & turning it into a war zone.

The Jerusalem police department issued a statement saying “The police have been making intensive efforts over the period of the High Holidays to enable worshippers of all religions to express their faith & celebrate their festivals in peace & security.” In fact, the police should get the hell out of there & let Palestinians deal with worshippers of other religions–like extremist Zionists–who try to violate the agreement with the Jordanian trust (which governs the Noble Sanctuary) expressly forbidding practitioners of other religions from worshipping there because it is a sacred site in Islam.

Apparently in a snit over Israel’s occupation of the compound, Jordan’s king Abdullah is refusing Netanyahu’s phone calls over the unrest. There’s nothing like a hissy fit to bring an occupying army to its knees. What Abdullah should be doing is to make an international scandal about what Israel is doing–not just to embarrass the UN, US, & UE for allowing the violent usurpation of religious freedom & human rights but to pressure them to oppose it. But no–Abdullah’s just not letting the butler answer his phone.

Palestinians are protesting in defense of the mosque because Israel’s intention is to take over & destroy the mosque & build a synagogue as part of manufacturing a historical & religious tradition for an invented people. Netanyahu, whose re-election has emboldened his criminality & insipidity, said “We are not the ones to change the status quo. Those who take pipe bombs to mosques are the ones changing the status quo.” Can you believe the temerity & idiocy of claiming Palestinians are trying to destroy the sacred grounds they are in fact defending!?

Building the economic, cultural, & academic boycott of Israel is urgent–along with demanding no aid of any kind to apartheid Israel.