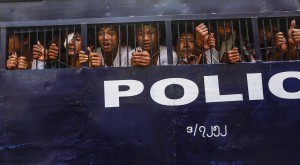 People cannot be faulted for confusion about what the hell is going in the world when you look at the shabby half-assed quality of news reporting. Just a few years ago, the US & European Union (EU) were heralding the new democracy in Myanmar. In fact, neither gave a rat’s ass about democracy there since they were only after a favorable investment climate & repression serves that best in the era of neoliberal plunder.

So now when the Myanmar military attacks unarmed students & Buddhist monks protesting repressive education reforms the US & EU have to cover themselves with expressions of incredulity & by pretending they were out-foxed by the regime. But repression only bothers them when it exposes their complicity with the junta.

In September 2012, villagers & political activists protested the Latpadaung copper mine project–a joint venture between a Chinese mining company & a holding company fronting for the Myanmar military in a deal struck by the junta in 2010. Protestors cited examples of nearby mountains destroyed by copper mining & nearby farmlands polluted with waste products from the mines. They claimed the mining caused environmental, social & health problems & demanded it be shut down. They protested the land grabs involved of 8,000 acres (3,200 hectares) without consultation or compensation–& the destruction of schools, homes, monasteries.

In November 2012, the military junta disguised as a civilian regime, went after the protestors, attacking them with water cannons, tear gas, smoke grenades, & white phosphorous incendiary devices. Over 100 protestors were hospitalized with serious burns. An official government commission, headed by Nobel Peace Prize laureate Aung San Suu Kyi, was set up to investigate the police brutality as well as the social & economic sustainability of the copper mine.

Suu Kyi argued that Myanmar should honor the deals with foreign companies because “If we unilaterally break off ongoing projects, we stand to lose international trust.” The commission ruled in favor of the mining project & avoided criticizing the government or calling for punishment & censure for riot cops involved in the violent attacks on protestors. When Suu Kyi went to meet with villagers & protestors to defend the commission findings she said, “I think we have to de-prioritize our emotions & needs when it comes to the greater good.” The hundreds of outraged & dispossessed farmers answered her with heckling. She should have been arrested & prosecuted too–not just for the banality of her defense but for colluding with the military against the interests of the farmers & people of Myanmar.

The US & EU want in on the plunder in Myanmar so what’s a little violence against protesters compared to the billions they can extract & the hopes of getting a competitive leg up on China? As part of their dog & pony show of concern, the EU is hand-wringing about the excessive force when it trained Myanmar riot cops in crowd control & the US embassy in tweeting up a storm advising “patience, compromise & restraint” on Myanmar’s path to democracy.

There are days when the stinking hypocrisy is just too much to handle. This shouldn’t be one of those days since we need to express our solidarity with the arrested students who may not see justice without our help. This is the contact information for the Myanmar embassy in Washington, DC: http://www.mewashingtondc.com/contact_us_En.php