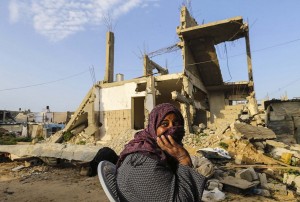 It’s impossible to imagine how wrenching Israel’s Operation Ethnic Cleansing was/is for the people of Gaza who saw their loved ones bombed to death, buried in cement rubble, disfigured & disabled with shrapnel, & the thousands made homeless by carpet bombing.

This grieving woman sits in front of her house that, according to the media caption, “was destroyed by Israeli shelling during a 50-day war last summer.” This is where we see that media doesn’t always (just usually) lie outright but they will never tell the truth about Palestinians. We should acknowledge first what’s unusual about this caption which doesn’t equivocate with words like “according to witnesses” or “according to Palestinian officials,” as if there was any confusion by anyone in the world that Israeli bombs leveled Gaza.

It isn’t parsing & nitpicking to ask why “shelling”? Why don’t they call it exactly what it was–not an attack by pasta or peanut shells but by megaton bombs? And what’s this “war” crap? Don’t you have to have two armies both with bombers & tanks to have a war? Is barbarism & genocide like shooting fish in a barrel now considered war too?

There is no way we can compensate the people of Gaza for their losses & trauma. The over one million people who protested Israeli barbarism are the forces of international solidarity that can stand against the new monstrous incursions Israel is surely plotting. Our mission is to build the economic & cultural boycott of Israel & demand no aid of any kind to Israeli apartheid & genocide.