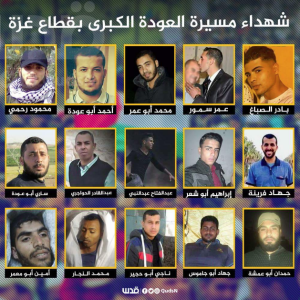 These are photos of the 15 Palestinians gunned down by Israeli snipers yesterday at the Great Return March. Most of these young men were between 17 & 35 years of age. The march was the launching event of six weeks of peaceful protests demanding the right of return for Palestinians forcibly expelled from their lands since 1948 & their descendants. Israel, calling the march a gathering of terrorists organized by Hamas, used drone technology & snipers with live ammo, rubber bullets, tear gas. Palestinian health officials report that of the 1,400 injured, 773 were shot with live ammunition. That kind of arsenal against thousands of marchers including elderly, little kids, family groups, all of whom were unarmed & marching peacefully. Israel & its media sycophants think they discredit the protesters if they say Hamas helped organize the march. How can Hamas organizing a peaceful protest be damning?

Stand with Palestinians in demanding Israel stop the violence against peaceful protesters. Time to hit the streets across the world for the next six weeks demanding no violence against protesters, the right of return for refugees, the end of military occupation, & self-determination for Palestine.