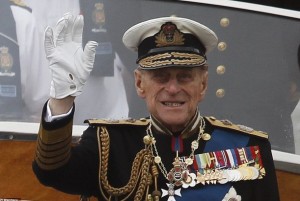 We now have proof positive confirming the widespread suspicion that Phil Windsor passed away years ago. Thank God for taxidermy. He was only 50 when he died but corruption takes its toll. If they let him go on aging he could have brought disgrace on the entire palace–& lord knows they already have enough.

The taxidermist did a good job. He was commissioned & flown in special from Texas where he did the same treatment on Dick Cheney. Phil & Dick share the same contemptuous sneer not uncommon among the elite & the taxidermist was able to capture that for posterity. It’s so special. Without it, no one would have believed Phil or Dick were still alive.

Phil is kept in a broom closet most of the time but gets wheeled out for ceremonies so no one gets suspicious. You can tell he’s dead by the lack of flatulence in the air. He was known for that & could clear a room of courtiers faster than you could say “Buckingham Palace.” The only ones who don’t take the hint are US congressmen who don’t even fare well standing next to dead Phil.