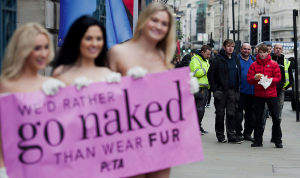 People for the Ethical Treatment of Animals (PETA) hired these naked models to stand outside London’s Fashion Week to protest the use of fur in garments. At some point PETA decided misogyny was the best tactic to oppose animal abuse & that has been their schtick ever since.

Protests to PETA by feminists & potential donors are swatted away like gnats & considerable arrogance. That’s because misogyny pays off for PETA. They have solid connections with media, giving them regular coverage in all the big papers & magazines; they are the favorite nonprofit of many high-profile celebrities, musicians, & athletes; & they have many lucrative marketing partnerships with corporations.

Feminists who object to exhibitionism as a political method are taunted as blue-nosed & “sex-negative” anachronisms from 1970s feminism who’ve aged out of relevance. It’s hard to deal with misogyny & stupidity at the same time but still it must be repeated that using sex to sell is a capitalist cliche. Feminists are not opposed to female sexuality; no movement did more to liberate it from exploitation, degradation, & violence. PETA just doesn’t see the money in that.

Who are the “protesters” talking to here? The fashion industry, where nudity is an everyday banality? Or the passersby grateful for a free peepshow? FEMEN’s exhibitionism gained them 15 minutes of fame; Slut Walks was another flash-in-the-pan spectacle–both done in by racism & by demeaning the struggle for women’s rights.

PETA doesn’t have to worry about all that; they’ve got corporate & media power on their side with movie stars as shills.