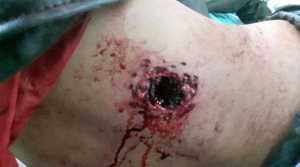 [Warning – Graphic Image, Viewer Discretion Advised] This what a close range pellets fire does to a human body, today this boy was hit by pellet fired by Indian forces. Full cartridge was fired upon him, leaving a major entry wound damaging his vital internal organs and the government still insists that pellet are non-lethal weapons meant to restrain rioting.

A Kashmiri activist on Twitter (who has thus far eluded the censors) posted this photo of a pellet munitions injury sustained by a fellow in Soura. Coincidentally, a Kashmiri Facebook friend referred me to the above post. There isn’t much information on the incident since it is posted to show just how “non-lethal” pellet guns are to the human body.

There is another report about a 16-year-old boy returning from an exam who was also shot at close range by Indian occupying soldiers. The boy’s abdomen was torn up by the pellets & doctors are assessing damage to other internal organs, particularly his kidney.

The use of pellet guns against unarmed civilians, even stone-pelting civilians, is a human rights crime. A movement needs to be built opposing the use of such weapons & the occupation of Kashmir.