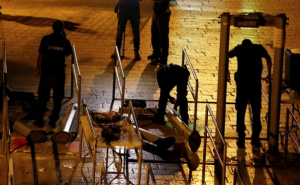 Israel, under pressure from massive Palestinian resistance in the streets, has decided to remove metal detectors at entrances to the Noble Sanctuary of the Al Aqsa mosque but intends to keep surveillance cameras. Netanyahu’s office issued a statement that the metal detectors would be replaced with “advanced technologies & other means” of controlling the compound.

A partial occupation isn’t good enough; it’s still an occupation & is by no means seen as a victory. The director of Al Aqsa said keeping the surveillance cameras does not satisfy Palestinian objections to occupation of the compound. Sheikh Raed Dana of the Islamic Waqf trust which administers the Noble Sanctuary said: “This movement is a movement of the street. We at the Waqf listen to the street. The street says yes & we say yes; if the street says no to the measures, we will say no.” “The street” of course is Intifada.

Photo is Israeli security (with their tails between their legs) removing the metal detectors.