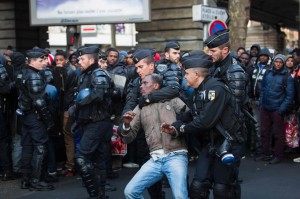 From the use of martial power, you’d think these Parisian gendarmes had nabbed a serious felon. But it turns out he’s a refugee in a makeshift camp under the Stalingrad metro station which is being dismantled for the third time in three months. He is being “evacuated.”

The story of the “evacuation” doesn’t quite add up. Reports say shortly after 6 am, most of the 500 Afghan & Sudanese refugees who had been staying in the squalid encampment (lacking basic necessities like toilets, food, medical assistance) began boarding chartered buses to take them to “reception” or “accommodation” centers. Police said about 1,350, mostly refugees from other encampments, had gathered to be re-located to the centers.

It isn’t explained what these reception centers are. They certainly aren’t for rendering hospitality (like showers & clean toilets or a hot meal) but are more likely for processing asylum applications. That would explain why so many came from far & wide to board the buses.

Without explanation the story then proceeds to the evacuation by gendarmes which French authorities say passed off largely without incident. So a little elaboration here would be useful. Did French authorities put out the word that they would be transporting people for processing asylum applications? Exactly how does their application process function? Can refugees just go down to the reception centers & apply or do they have to wait for the French government to haul them on buses? And why did French authorities combine that massive bussing operation with dismantling the encampment?

That encampment of about 500 people was a testy place with frequent fights between refugees. Of course it was. Any human being who needs to poop or bathe or canoodle or chat with friends would find it a living hell to stay in such a place for an hour, let alone months of uncertainty.

Pamela Gellar, the deranged, professional hater, Zionist, & Islamophobe, put a four-minute video on YouTube titled “Paris Muslim Mobs Violently Riot under Paris Metro.” It’s disturbing not because human beings under extreme deprivation & duress are acting out aggressively but because we can see the contemptible disregard for refugee rights & dignity by French authorities. And their louse of a president calls himself a socialist!

It’s reported that 80,000 refugees applied for asylum in France last year. Applying isn’t the same as being given residence papers & work permits. That figure never gets reported.