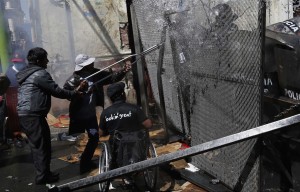 The disabled protesters who set out March 21st on crutches & in wheelchairs for a 234km/145 mi highway march to La Paz, the capital of Bolivia have arrived. They are demanding an increase in their state benefits from a paltry 1,000 boliviano (£102, $144) a year to 500 boliviano a month. In attempting to reach the National Palace where Bolivian president Evo Morales has his offices they were confronted with riot police blocking their way (shown in this photo), as happened the other times they made this protest trek.

A good share of the left have completely lost their bearings in evaluating the regimes that took over from the military juntas of the 1970s. It probably isn’t a coincidence that these oligarchic regimes transitioned from juntas to their liberal facade at a time when neoliberal economics began to be implemented. That’s something that needs to be investigated. But it was likely intended to make the transition to outright plunder of natural resources by multinational enterprises less confrontational.

Left analysts don’t see it that way. They crow about the dramatic reductions in poverty all over Latin America by regimes they consider left-wing & who they claim have rejected neoliberal economic policies. One research institute claims over 60 million people in Latin American have been lifted out of poverty by these beneficent regimes; according to the UN they have cut poverty almost in half in Latin America. Brazil under Dilma Rousseff is a showcase for them–which is why they denounce the protests against her neoliberal policies as rightwing.

According to reports, Bolivia under Evo Morales, who became president in 2005, successfully reduced its dependence on the IMF & World Bank for bail out loans & with deft economic policies was charting an innovative & independent course–some kind of sui generis formation that could short circuit the inherent inequalities of capitalism–a capitalism but not capitalism.

Maybe that kind of independence isn’t working out so well–more likely it’s completely phony–since last February Bolivia took a $200 million loan from the World Bank which it is still repaying for old loans. The new loan is for disaster & climate risk management & isn’t that admirable. But if they weren’t still paying back old World Bank loans, they’d have more than enough money to pay decent social security benefits to disabled workers.

Evil fairies from outer space bombing in Syria & good fairies in Latin America magically transforming the inherent inequalities of capitalism into utopia! Such is the regrettable state of political analysis coming from the left today.