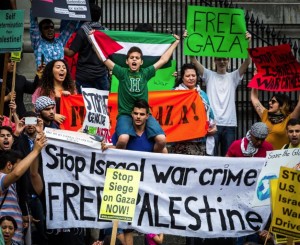 On the other hand, over one million people were in the streets in dozens of countries & hundreds of cities & small towns demanding “Stop the slaughter in Gaza!” They weren’t just Palestinians & they weren’t just Muslims–though both groups played central roles in organizing political solidarity–but every nationality & religion under the sun.

Zionists continue to berate Palestinian solidarity for not focusing on Syria (as if they gave a rat’s ass about any place other than Israel); others are bewildered by the groundswell for Palestinians when there has been no mass response to Syria or for that matter to Afghanistan, Kashmir, Sri Lanka, Somalia, or any of the many conflicts. It’s important to assess why Palestinians have evoked such massive solidarity, especially since they stood alone for over 66 years. But to attempt in any way to challenge the importance of the Palestinian struggle or to suggest it is hogging all the attention from more important struggles or to compare body counts to rate importance is unworthy of any respect whatsoever. It means something when you find your views in accord with Zionists (& what it means ain’t that swell) but it is colossal hubris to challenge or second guess why a million people rise up to stand with justice.

No one wants to let history pass them by. These protesters in Vancouver, BC, Canada are making history by the simple act of standing up for Palestinian justice. When they’re old & gray they will look back & say proudly they were there when one of the most important struggles of our era began to get it’s due. And when there is a democratic secular state where Jews & Palestinians live in harmony, they will know their contribution to human civilization was monumental.