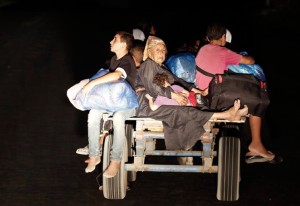 And so Palestinian diaspora continues: now 66 years of young, old, infirm, disabled, terrorized off their lands, out of their homes into refugee camps or exile. Operation Ethnic Cleansing in Gaza is intended to destroy the infrastructure of Gazan society & forcibly destroy or expel the population; it hasn’t a damn thing to do with fictitious rocket barrages from Hamas militants.

Netan-psycho-yahu proclaims Israel will not buckle before international pressure & he is not referring to a groundswell of revulsion at ethnic cleansing from any government. The regimes weighing in outdo each other with scurrilous, shameful denunciations of “Hamas terrorism” & weepy-assed declarations that Israel has a right to defend itself against those rockets–for which nobody can provide documentation because there is none. Showing photos of Israelis in parking garages waiting out sirens is not documentation of terrorism. It is Israeli political theater to scare the hell out of its citizens & fool them & us into thinking massive rocket barrages really exist.

As we would expect, the US Congress & Canada have issued inflammatory proclamations endorsing Israeli genocide. If you can imagine, the resolutions are even more war-mongering than the Knesset. But what do we expect from governments that conduct wars in Afghanistan, Pakistan, Iraq, Somalia, Yemen, DR Congo, & so many other places, & work tirelessly to thwart popular thrusts for democracy, like the Arab uprisings? Barbarism is the very nature of neoliberal capitalist regimes.

India, whose new prime minister is a fascist, issued a less inflammatory statement, shaking the naughty finger at both sides & urging restraint from both Palestinians & Israel. Not too much restraint on the part of Israel though because behind the scenes India has a lucrative political & military relationship with Israel, including $10 billion in military sales in the past decade.

Maybe the saddest proclamation of all comes from Cuba. No one is demanding long-winded denunciations of Israeli genocide but it certainly merits more than a couple sentences in Granma. The Cuban statement condemned Israel’s policy of collective punishment & disproportionate use of force & then went on to call for peace talks between Israel & Palestinians to set up a Palestinian state–the old bantustate solution long-since discredited by the Oslo Accords & confirmed in the past two decades of trying to implement them. As for peace talks, what did Cuba miss in the catastrophe of Israel talking peace with the Palestinian Authority & US while it escalated settlements in the West Bank & conducted bombing sorties in Gaza?

And where is the UN in all this? After all, isn’t harmoney between nations their stated mission? Don’t they have a pile of proclamations & resolutions defining war crimes & genocide? And doesn’t Israeli conduct in Gaza violate every single one of them? Why instead of denouncing this war does the UN content itself with mopping up some of the carnage by providing abandoned schools for Palestinians running from bombs to live in, sleeping on bare floors with blankets as mattress? Why does the UN make public estimations that 77% of the victims in Gaza are civilians when 100% of the people of Gaza are civilians? And why does it issue the same kind of equivocations as India, urging restraint on both sides? How does the distinction between ethnic cleansing & self-defense so escape them?

The international pressure that concerns Netan-psycho-yahu is Palestinian solidarity & the boycott movement. Mobilizing opposition to genocide is not a flash-in-the-pan operation but an ongoing campaign calling to men & women of good will across this planet to join in & make the voice of justice thunderous: Stop the massacre in Gaza!