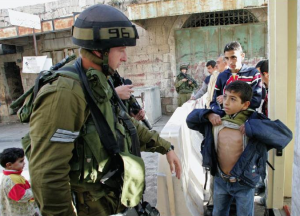 A Finnish woman journalist of Palestinian ancestry was prevented from covering the visit of US vice president Mike Pence to Israel today because she refused to be strip searched. She was singled out from other journalists & taken behind a curtain at Netanyahu’s office where she was interrogated, frisked, scanned with a metal detector, & then told to remove her bra. When she refused, she was barred from covering the event.

This is not the first time ethnic profiling & strip searching has been an issue for Palestinians or Arabs visiting Israel, including reporters. Reported incidents go back to at least 2011. Most often strip searches occur at Israel’s international Ben Gurion airport but many foreign airports allow Israeli security officials to do pre-flight strip searches for Israeli carriers.

In a 2011 incident, a pregnant Palestinian Al-Jazeera reporter left an event after being ordered to remove her shirt & then after several minutes of undress being ordered to remove her bra. Several Arab reporters who had been invited to the same event by Israeli officials were ordered to remove their underwear & then had to sit for nearly half an hour before their clothes were returned. Several months later in the same year, a pregnant photojournalist on assignment for the NY Times was strip searched entering Israel from the Gaza Strip. Because of her pregnancy, she requested not to go through an x-ray machine inspection but instead was forced through the machine three times by laughing, mocking soldiers who may have mistaken her dark features as Palestinian.

The Foreign Press Association (FPA) in Israel is protesting the strip searching of the Finnish reporter & accusing Israel of ethnic profiling as a way to intimidate reporters. The FPA represents about 400 journalists working for international media in Israel & the occupied Palestinian territories. All of the reporters hold Israeli press credentials which are only granted after extensive background checks so these strip searches of Palestinian & Arab journalists are entirely gratuitous, racist, discriminatory, & of a piece with apartheid. They are the kind of humiliations Palestinians face daily passing through the at least 100 military checkpoints within the occupied West Bank.

Photo is schoolchildren in Hebron partially strip searched as they pass through a checkpoint.