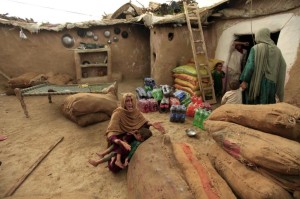 Emancipation US-style: the US-NATO war in Afghanistan has been so liberating for women by bombing them out of their homes so they could travel to foreign countries as unwelcome refugees & disperse their unaccompanied children on the dangerous immigrant routes to Europe & Australia where they would be treated like vermin by border patrol. But at least their nails would be done at that beauty salon in downtown Kabul before they left.

Now for at least the last few years, the Pakistani government has been cracking down on the illegal slums where they live outside Islamabad, coming in with riot police & bulldozers to level them to make room for gentrification & redevelopment. The refugees are unable to afford the high rents in the city so built flimsy dwellings with no access to electricity, gas, or water mains. The Capital Development Authority (CDA) which is clearing the slums has no compensation or rehousing plans for the residents, which will make thousands of people, including children, elderly, & infirm, homeless. Many have lived here for nearly forty years after fleeing from the former Soviet invasion. This woman is objecting as the CDA moves in to destroy her home.

The UN refugee agency worked with the Pakistani government to induce refugees to return to Afghanistan by giving them the chump change of US $150. Of course, Afghanistan is still being bombed by the US, there is no housing for the refugees, & no work so there was little point to going home. At least in Pakistan some could find work as domestic workers–even if the pay was only about US $100 a month.

Residents are putting up a fight with the bulldozers & riot police but, as in other countries, they will be removed & just have to find another place of land where they can rebuild & live for at least a while.

Such are the glories of emancipation US-style.