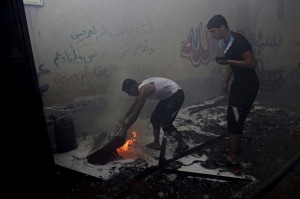 The very worst of this phase of Operation Ethnic Cleansing has abated in Gaza but it has not ended & bombing sorties continue to take down buildings. Several people have died. Meanwhile Israel is on a propaganda blitz to attempt to undo the damage done by its murderous over four week rampage.

This propaganda offensive is sucking on the dregs because it is so hard to counter the hundreds of gruesome images of Palestinian children tweeted around the world. The primary intent is to vilify Hamas which has its problems but is not one iota responsible for this rampage. Some of the reports in “respectable” media seem more like Onion or Mad Magazine pieces; other reports draw on the methods of the scurrilous & anti-Semitic “Protocols of the Elders of Zion” invented by czarist agents in Russia (in 1903) & which continue to feed social hatred against Jews.

One report is that a Hamas official admitted to the kidnapping of the three Zionist teens in the West Bank. Patent & provable nonsense. Another punk Palestinian who claims he’s the son of a Hamas founder is being interviewed all over the place, pretending he’s got the goods on Hamas crimes. Problem is the guy is disturbed & a traitor who worked within Palestinian politics as an undercover agent for Israel. Fox News & The Times of Israel report that a secret letter smuggled from a Palestinian within Gaza claims Hamas used forced labor to build the tunnels & then killed them all so they couldn’t identify the location of the tunnels. One video purportedly shows a Muslim child teaching how to “behead the infidel” per the Quran. Reports are also attempting to identify Hamas with ISIS in Iraq & Syria. This kind of rubbish is pouring out everywhere to sow confusion & discord. But the bombing in Gaza & the deaths of hundreds of men, women, & children in the most barbaric ways speak louder than dozens of crazy-assed lies.

Schools are opening up in just days & it’s the best time to plan educational events because many people of good want to understand what the media tries so damn hard to make inscrutable. Rallies need to continue & we need to beat the drums loudly for the boycott (BDS) of all Israeli products (barcode beginning 729)

These young men–of the “Hamas age”, so Israel considers them outside the parameters of ethnic cleansing–are trying to douse a fire after an Israeli airstrike today.