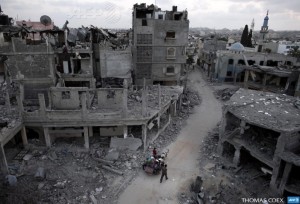 This looks like a scene from the apocalypse but it’s Beit Hanoun, a city in northern Gaza taken on August 18th. The family with the horse & cart are fleeing–but of course, with no place to go. Gaza remains surrounded by an apartheid barrier. The UN assures us no war crimes were committed; Israel texted & phoned people a few minutes before they went berserk with the bombs.

There are photos now emerging of Palestinians sleeping on top of rubble, sitting despondent & forlorn because they have no place to live & there is no way in hell they can clean up the mess & rebuild while Gaza is still under Israeli blockade. The blockade makes sure they don’t even have sufficient food & medicines–& there are over 10,000 seriously injured people.

Sustained solidarity work must include rallies, educational activities, & above all, evangelizing for the economic boycott (BDS) of all Israeli products (barcode beginning 729). Many left groups shame themselves by opposition to BDS & even campaign against it claiming it hurts Israeli workers. They refuse to even build teach-ins which would show they stand on the wrong side of history & justice. They not only betray solidarity but expose the blithering idiocy of their politics & put the last nail in their own coffins. Good riddance to them.

One can stand with Israeli apartheid & ethnic cleansing or one can stand with Palestinian justice. There is no middle ground. Not even if you think you carry the mantle of Karl Marx. For that matter, if Marx knew the betrayals conducted in his name he would turn over in his grave so fast he’d become an important source of energy.