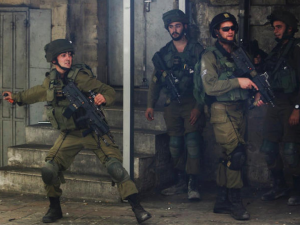 Once again in defense of stone throwers:

This is an Israeli soldier in the occupied West Bank city of Hebron (on Thursday) lobbing a tear gas grenade & attempting to stop protests in solidarity with 1,500 Palestinian prisoners on hunger strike in Israeli jails.

There are about 6,500 Palestinians currently serving time in Israeli jails, 500 of them held under administrative detention (which means indefinitely without charges) & including 250 Palestinian children & teens (mostly for stone throwing).

According to Middle East Children’s Alliance, Palestinian children are subject to violent attacks by the occupying forces & Zionist settlers “on an almost daily basis.” Hundreds have been killed at the rate of one every three days for 13 years with almost complete impunity for the soldiers. Palestinian children who throw stones get longer jail sentences than Israeli soldiers who execute incapacitated Palestinians lying on the ground. Gideon Levy said, “There is nothing more Israeli than a court that gives a soldier who killed a Palestinian in cold blood a sentence fit for a bicycle thief.” It’s what he calls “Israeli army justice.”

If you were a child, if this were your reality squeezing the life energy right out of you to ethnically cleanse you & your entire community, a rock is the least of your defense.

International solidarity provides the “rockets” necessary to end the occupation & fight for a democratic secular state where Palestinians & Jews can live as brothers & sisters. Build & honor the cultural & economic boycott of Israel. Buy nothing with a barcode beginning 729 & check every damn label on every product.