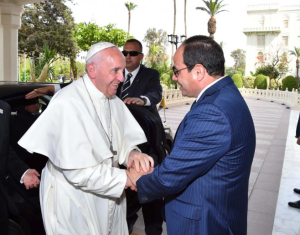 Pope Francis has his own vision of how to stand for human rights–making his commitment somewhat doubtful. There should not be any affable state visits with General Abdel Fattah al-Sisi in Egypt whilst human rights groups are denouncing him for political repression & for forcibly disappearing, incarcerating, torturing, executing tens of thousands of political opponents to military rule.

There would much less ambiguity if Pope Francis would stand on the balcony in St. Pater’s Square denouncing the general & military junta for its crimes.

To some it may look all ecumenical & diplomatic to go to Egypt & meet with Muslim & Christian leaders & visit with the general but to others it looks more like playing both sides of the street. If you’re a spiritual leader & moral teacher, straightforward support for human & democratic rights is the only thing that cuts it. So which side is Pope Francis on?