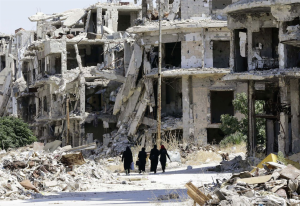 In an era when wars, bombing, & military occupations dominate world politics, there is nothing more imperative than to rebuild the international antiwar movement. That makes the dysfunction & fragmentation of that movement all the more tragic as a result of discordant views of the Syrian War.

It’s not unlike the discordance over WWI & WWII, both competitions over the division of colonial conquests but promoted as epic wars for democracy. It is not exaggeration to claim that most wars today continue the unfinished business of both those monstrous wars to reverse the successful anti-colonial struggles against US & European armies & maintain the colonial projects (like Israel).

The divisions in the antiwar movement over Syria are emerging as a watershed moment in politics. If antiwar forces can’t agree on what’s happening, it’s not possible to chart a united course of action. Theoretically, the divisions represent the triumph of libertarian theoretical methods, of conspiracy-mongering, of inventing realities & denying or ignoring what doesn’t fit.

The primary disputed questions are: is Assad a brutal dictator or a champion of the Syrian people? Is the US involved in a regime-change operation or are its motives for involvement more complex–not humanitarian, but more complex? Was there a 2011 popular uprising against Assad’s dictatorship or was that orchestrated by the CIA & Mossad, as libertarians claimed of all other Arab uprisings?

None of those who support the Syrian government ever deal straightforwardly with Syrian & Russian bombing of civilians, including with the use of chemical weapons & barrel bombs. That’s because they consider Syrian & Russian bombers emancipatory against US-backed terrorists & “jihadists.” The US & other regimes are training, arming, bankrolling some of those militias but that is not the entire story. Some of those militias oppose the dictatorship of Assad. The US & other regimes are there to defeat the democratic forces & confuse the issue. The US has always been able to tolerate dictatorship but it cannot allow popular revolutions against them. It postpones the eventual removal of Assad to destroy the democratic movement in league with Russia & Assad.

Many prominent political analysts (like Tariq Ali & John Pilger) do not oppose Assad nor Russia. Infallibility in politics is not a concept any serious activist should respect. Every one’s views must be evaluated carefully. A US antiwar delegation met with Assad in Damascus & are now on tour peddling their politics as representing the US antiwar movement when they represent only a handful of activists. There has been no authoritative national antiwar conference in the US for years where these issues can be debated out.

Most of those supporting Assad against an alleged US regime-change operation rely on reporting from the most questionable sources–sources who claim the White Helmets first responders who are digging people out of cement rubble are CIA operatives; that claim the images of little Omran were a deception put out by jihadists; that do hero worship of Assad rivaling the cult of Stalin; that glorify Putin without any regard for his political policies at home or war crimes in Syria & call any criticism of him demonizing.

The Black Agenda Report (BAR), which is an invaluable source of analysis on many issues, just published an article by editor & senior columnist Margaret Kimberley where she said about Syrian use of barrel bombs: “The so-called barrel bomb doesn’t kill more people than conventional weapons provided by the United States & its puppets.” She echoes the article by former UK diplomat Craig Murray who said he would rather be bombed by a barrel bomb than other weapons. A simple internet investigation of barrel bombs will show their barbaric character & versatile, indiscriminate lethality. But more importantly, why is BAR minimizing the use of any kind of bombing & weaponry against Syrian civilians?

It isn’t irrelevant that BAR just published a laudatory article about Filipino president Rodrigo Duterte for standing up to the US, making no reference to Durterte’s death squads against drug users or his involvement in the US re-militarization of the Philippines.

This division among antiwar activists will either be resolved democratically at a national conference including all, not just leading figures, or it will continue to paralyze opposition to all US wars.

The only principled demand is opposition to US, Russian, & all foreign military intervention into Syria, Iraq, & elsewhere, in the air & on the ground. Since when do antiwar activists without the authority to do so declare some bombing progressive & some reactionary!? That demand must include Syria end the bombing of civilians, under any guise.

This photo is Homs, Syria. Is this anyones’s vision of freedom? Not that of Syrians who have either been bombed to death or have fled as refugees.