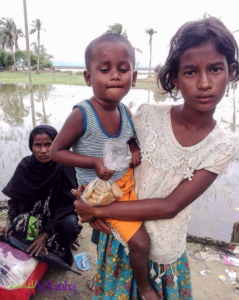 Just as a UN agency warns that Rohingya refugees, the majority women & children, are at risk of human trafficking, the Minister for Social Welfare Nuruzzaman Ahmed announced the Bangladeshi government will “rehabilitate” about 6,000 orphaned Rohingya children. It will provide them national ID cards (he didn’t specify what rights, if any, come with the card) & will provide services “per the standard of Sheikh Russel Destitute Children Training & Rehabilitation Center for Children” (he didn’t specify what those standards are). The children will be isolated from the rest of Rohingya refugees & separated by age into different camps on 200 acres of land which the government has requisitioned (but not yet received) specifically for that purpose. Children up to seven years of age will be placed in one camp & those between eight & 18 years of age will be placed in another. This has all the smell of a Trojan Horse.

A government which administers a sweatshop economy based on the exploitation of women & child laborers & which has proposed deporting Rohingya refugees to an uninhabitable island subject to monsoons & regular flooding cannot be trusted with the welfare of Rohingya children. Why do orphaned kids have to be isolated from the rest of the Rohingya community? The minister expressed concern that “they may get involved in unrest if they remain amongst the rest of the Rohingya” & that separating them was for their own good. What kind of nefarious influences among refugees is the minister talking about? He’s blowing smoke. Isolating them takes them away from oversight by their own community with vested interests in protecting their kids, even if they are without parents or guardians. Why would the minister separate children by age & ignore that many older children are now the sole caretakers for their little siblings & that separating them would be extreme trauma from which many would not recover?

There does need to be a database of orphaned Rohingya refugees; there do need to be thoroughly vetted professional staff to deal with their special needs & advocate for their safety & care until homes & asylum can be found for them. But this should not be left to a ministry of the Bangladeshi government which very well may feed these little kids into a pipeline of sex & labor trafficking. Whatever happens to the kids must be monitored by Rohingya refugees & their representatives.