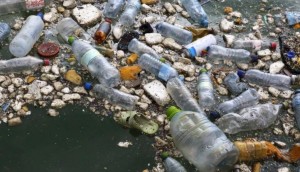 According to a report released by the Ellen MacArthur Foundation at the World Economic Forum in Davos, the ocean is expected to contain more plastic than fish (by weight) by the year 2050. Plastic packaging leaks into the oceans at the rate of one garbage truck full per minute because there is no unified global system for recycling. Currently only between 5 percent & 14 percent gets recycled; 40 percent ends up in landfill, & the rest in the oceans.

The plot sickens: plastics production has increased twenty times since 1964 & is expected to quadruple by 2050. We’ll be awash in plastic without clean water to put in it. Water has become a catastrophe zone–including the oceans; Flint, Michigan; water tables contaminated by fracking. There are major alerts just in this region where towns are urged not to drink, cook, or bathe in the water.

One would think persuading the politicians, bankers, & corporate muck-a-mucks at Davos would get thinks rolling but we know from all previous environmental conferences held by the elite that nothing will come of it except public relations. They’re running our planet into the ground.

We have some hard choices to make & not a lot of time to do it.