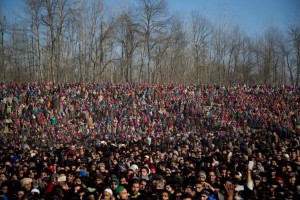 The media caption to this photo said: “Kashmiri Muslims watch the funeral procession of Shariq Ahmad Bhat, a suspected rebel, in Bandnu village, some 52 kilometers (33 miles) south of Srinagar…. Bhat was killed in a gun battle with Indian government forces Wednesday.” So now we know where but we have no idea why there was a gun battle. Since we can see Bhat’s funeral drew thousands of people, we know there’s more to the story than an outlaw being taken out by law enforcement.

The written accounts that appeared in dozens of sources didn’t do much better. Big news operations with reporters all over the world all gave the same canned report with the same headline: “Deadly clashes erupt between police, protesters in Kashmir.” Most added a matter-of-fact sentence saying Indian forces opened fire on people protesting the shootout, killing another young man & injuring two others.

To understand what actually happened, one has to piece together information from several sources. Greater Kashmir & Kashmir Rising are the two major broadsheets out of Srinagar. Since we know the incident took place only 33 miles away, both are close enough to send reporters to the scene. That both accounts relied only on statements from Indian military officials testifies to the censorship & tyranny of the Indian occupation.

This is the story, as they reported it–leaving aside conflicting details, though it’s impossible to leave out the burlesque & there is nothing funny about this incident: When Indian occupying officials were tipped off that three “militants” were in the village, they deployed a joint force of three paramilitary & counter-insurgency outfits to get them–though there is no indication the three militants had engaged in any crime. It appears they didn’t even know who they were looking for. The joint operation set up a cordon around the village late evening to prevent escape. The militants came out of hiding, fired one shot at the soldiers, & went back into hiding–thus identifying their location in a home.

When the militants refused to come out of the house (now surrounded by soldiers) & surrender, a gunfight began & went on for several hours at night, resuming again in the morning. When the soldiers tired of shooting, they simply blew the house up. In the debris, they found the body of 20-year-old Shariq Ahmad Bhat & allegedly, one AK-47. The other two men, if they were ever present, had escaped.

But there’s another part to the story: While “the encounter” was going on, “hundreds of people from different villages assembled near the encounter site” pelting the soldiers with stones while chanting pro-freedom & anti-India protests. This media referred to as “the clash.” The soldiers fought the protesters off with tear gas because they allegedly were trying to help the militants escape. They then began shooting live ammo–even though military personnel assured media they had “exercised maximum restraint.”

A 25-year-old sand digger named Parvez Ahmad Guroo was passing by the protest & was struck in the face by a bullet. He died, leaving an elderly father & two sisters (one with a disability) who he supported in a country with no social security. Several other protesters sustained gun shot wounds but the numbers conflict. Police claim four; protesters claim many more injured. All that death & carnage but at no time does the military or the media identify why Shariq Ahmad Bhat had to be taken out.

The funerals of both Bhat & Guroo were attended by thousands. The only positive element in this tragic story is that hundreds of unarmed protesters defied an armed force to defend the young man under siege. That is the singular strength of the struggle for Kashmiri independence.