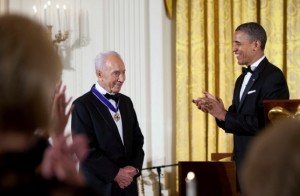 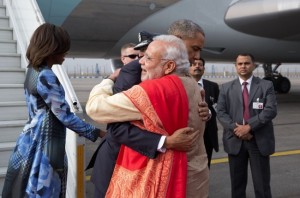 Obama, our erstwhile man of the people: when he was elected, we should have asked, “what people” since his warm embrace is reserved for the terrorists of the world.

He is shown in 2012 giving the presidential Medal of Freedom to then Israeli president Shimon Peres who began his career in the Haganah, a Zionist paramilitary force that terrorized Palestinians off their lands in 1947. Bill & Hillary Clinton, Madeleine Albright (another honoree of the Medal of Freedom in 2012), & Elie Wiesel were among those attending the presentation.

He is also shown embracing Indian prime minister Narendra Modi on a 2015 state visit to India. Modi, the very man implicated in a violent 2002 pogrom against Muslims in the state of Gujarat & in maintaining the brutal occupation of Kashmir.

Always good to remind ourselves that the US president is not “the leader of the free world” but the chief executor & administrator of US corporation & bank policies. The “people” he speaks for are thugs, criminals, & predators who look at the face of human suffering & ask, “how can we exploit all that to make a buck”?