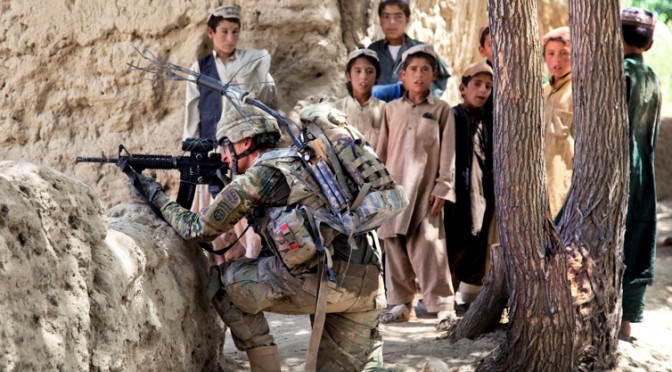 Obama says he’s “heartbroken” over the shooting deaths of three soldiers & the suicide of the shooter at the Fort Hood military base in Texas. That would be a step in the right direction–if it were at all believable. The US War-Monger in Chief didn’t express any sorrow when they reported in 2012 that suicides in the military eclipsed the number of combat-related deaths. Suicides among soldiers & veterans is now about one-a-day & increasing.

Of course, the Pentagon cooks the books when it comes to accurate reporting of combat deaths so none of those figures are reliable. On the Vietnam Memorial in Washington, DC, there are about 58,000 names of soldiers killed in that war. Names continue to be added. But more importantly, for that memorial the Pentagon only released the names of soldiers who were injured & died in Vietnam. If they were injured in Vietnam but died on a ship en route to a hospital in Japan, if they died from Agent Orange poisoning in a US hospice, or died from complications of combat injuries after release from the military, or if they were injured in the US invasion of Cambodia, the Pentagon does not include their names among Vietnam War casualties. It should also be added, they’re not counted if they just drank or doped themselves to death over grief & guilt at what they had done in war.

Obama has yet to shed any tears over the monumental numbers of civilian deaths caused by US wars–they number in the millions, not even including those who suffer from injuries like dismemberment, disfigurement, & birth disabilities.

Last year, the Journal of the American Medical Association published a study funded by the Pentagon that claimed the real reason behind the catastrophic number of military suicides was not combat experiences or extended deployments but in fact underlying mental health issues in the population. It’s inarguable a society built & sustained by racist policies & wars will have more than its fair share of insanity. US politicians give glaring testimony to that–only rivaled by the parliament of England. But to find scientists willing to sing for their supper who dare claim soldiers who kill, massacre, rape, participate in torturing prisoners, are coming home sane is an abomination of science & politics.

So hold your tears, Obama! You’ll need them when you meet the devil as he leads you to that special hellhole set aside for war criminals. You’ll be spending your eternity with the smelly likes of Hitler, Kissinger, Bush, Reagan, Nixon, & Dick Cheney. You earned that shame, buster!

(Photo of US soldier in Afghanistan putting children in harm’s way from antiwar.com; photographer not identified)