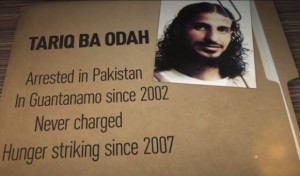 It’s not certain how Obama weasels out of condemnation for the same human rights crimes Netanyahu commits by unlawful detainment of prisoners & force-feeding prisoners who protest this by hunger strikes.

We just went through weeks of crisis over the health of Palestinian hunger striker Mohammad Allan in the Israeli gulag. Israel has its gulag; the US has Guantanamo & numerous secret torture centers, including in Afghanistan.

Tariq Ba Odah is a 36-year-old Yemeni man & Saudi resident picked up in 2001 in Pakistan by local police, turned over to the US military, & transferred to Guantanamo in 2002 for no apparent crime. He has served all that time, subjected to torture, without charge by the US government. In 2007 he initiated a hunger strike to protest indefinite detention for having done nothing & in 2009 was cleared for release by the Obama regime.

Before the Saudi-led bombing assault on Yemen, there were many protests in Yemen demanding the release of Yemeni detainees in Guantanamo. For reasons understood only by the criminal minds that run the US, Yemeni detainees are in a special, arbitrary category requiring they be released to a third country. That is the hogwash reason Ba Odah has not been released.

Ba Odah has been force-fed over the eight years of his hunger strike & now on the point of death, he is being force-fed twice daily. Force-feeding has been determined by countless authoritative medical bodies as torture. Quite frankly, it’s a form of waterboarding. The arms, legs, & head of the prisoner are strapped to a chair while tubes are pushed through his/her nose to the stomach. Ba Odah, who is about 5’4″ tall & once weighed 160 pounds now weighs 33 kg (75 lbs) & is considered dying.

The Center for Constitutional Rights has filed “Ba Odah v. Obama”, a habeas corpus petition on behalf of Tariq Ba Odah demanding his release on humanitarian grounds–which to date the Obama regime is denying.

Ba Odah is a remarkable man with undaunted spirit. He wrote: “A captive does not possess any realistic means to send his messages to the world other than to strike. . . Freedom should be much more precious for the human being than all the desires on earth. And we should never give it up regardless of how expensive the price may be.” (Tariq Ba Odah, April 2013, Guantánamo Bay, Cuba)

There must be an international hue & cry against these monstrous practices. Obama should not be seen as man of the people but as the war criminal & executioner that he is.