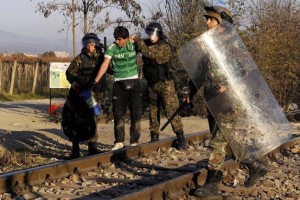 We always have to keep in mind that anti-immigration policies are fundamental to modern capitalism & are coordinated internationally while making allowances for national particularities. The massive refugee crises from the Middle East & Africa challenge those policies & what different regimes are doing is trying to jockey between maintaining those policies & avoiding public condemnation for human rights abuses of refugees.

There’s a real shell game going in the US–a hard cop/soft cop thing. Republicans play the xenophobes (not a stretch) & Obama calls for humanitarian acceptance of Syrian refugees (ignoring there are also Afghan, Pakistani, African, & other refugees). In actual Obama policy, just over 23,000 Syrians have petitioned the US for asylum since 2011. The Obama regime has only accepted just over 2,000. Another instance of Obama talking out of both sides of his ass. Were the other 21,000 vetted out to be terrorists? What could possibly disqualify them from asylum rights?

But François Hollande in France may take the cake–& unfortunately gullible people are falling for his con. Media is lauding him high & low for declaring it France’s “humanitarian duty” to accept Syrian refugees. One headline read “France shows US bigots what class & humanity look like with an amazing act of kindness.” Knock knock; is anybody home there!? The Hollande Regime is bombing the hell out of Raqqa, Syria; it’s been razing the shanty towns & deporting Roma for years; it uses police violence against refugees at Calais & demolishes refugee camps set up near Paris, in outlying areas, & across the country; it refuses to provide basic necessities to refugees like toilets, medical assistance, food.

If the Hollande regime accepts any refugees, just like the smooth-talking Obama regime it’ll be a handful when there are tens of thousands on the eastern & southern borders of Europe. What Obama, Hollande, & other European regimes are trying to do is talk a good game to cover their asses against criticism while scapegoating Syrian & other refugees to deny them asylum.

This young man is an Iranian (maybe he isn’t, maybe he is) being roughed up & “escorted” back to Greece by Macedonian police as he tried to cross the border. The caption read “Balkan countries have begun filtering the flow of migrants to Europe, granting passage to those fleeing conflict in the Middle East & Afghanistan but turning back others from Africa & Asia.” How delicately put: “filtering.” What they are in fact doing is violating umpteen international laws & centuries of humanitarian practice in denying asylum.

Immigration is a human right. Rather than fall for the con, we need to organize to demand these regimes open the borders & grant asylum.