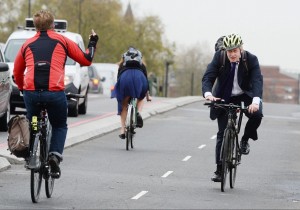 This fellow speaks for all of us as he flips the bird to Boris Johnson, mayor of London, who just returned from a trade trip to Israel to drum up business. While there, Johnson called the boycott of Israel “foolish” & caricatured the BDS movement as “a bunch of snaggle-toothed, corduroy-jacketed lefty academics.”

Ignoring the Israeli carpet bombing siege of Gaza in 2014 & the current pogrom in the West Bank, Johnson called Israel “the only democracy in the region.” The man will say anything when he’s groveling.

For the record, London already has 141 Israeli high-tech firms–16 of which are listed across London Stock Exchange markets with a combined market value of £3.7 billion ($5.6 billion).

Johnson had scheduled three visits to the occupied West Bank to meet with a youth group & some businesswomen–who both (of course) cancelled because of his remarks. The third meeting with Rami Hamdallah, identified by the Guardian-UK as the “Palestinian prime minister,” went ahead as planned (of course). Hamdallah actually holds the prime minister title for the Palestinian National Authority, which was formed out of the Oslo Accords to oversee the dismantling of Palestinian self-determination–a mission they’ve performed with contemptible servility. Undercutting BDS is part of their mission as we saw with Mahmoud Abbas when he met a few weeks ago with a Zionist group in the Netherlands.

BDS has a lot of work to do but if it weren’t already having a powerful effect, Israel & its supporters wouldn’t be so obsessed with denouncing & caricaturing it.