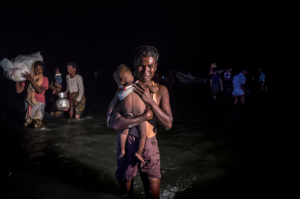 An article in the NY Times titled, Rohingya Recount Atrocities: ‘They Threw My Baby Into a Fire’:

Given who the NY Times represents politically & the billions of dollars in US investments in Burma, it’s unlikely such an honest report on genocide against the Rohingya would appear were it not for the role of Rohingya activists & their supporters on social media who have made this genocide a central issue in world politics. There would be reports, of course, but they would focus primarily on ARSA–portraying them as terrorists–& minimize the atrocities committed by the Burmese military & paramilitary death squads.

This article resonates with those in the NY Times last year on India’s use of pellet munitions in Kashmir–an issue they would probably have let pass or skewed in India’s favor were it not for Kashmiri social media activism that made pellet guns an international human rights issue.

(Photo by Sergey Ponomarev for The New York Times)