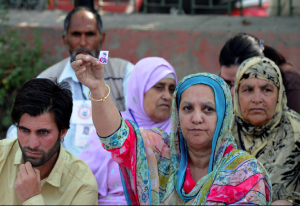 Parveena Ahangar (holding up photo) with other family members of those forcibly disappeared at monthly sit-in at park in Srinagar last Tuesday. The sit-in isn’t just a ritual but a protest demanding to know the fate of those disappeared during custody by Indian army.

Stand with Kashmiris. Demand an end to forcible disappearance.
End the occupation. Self-determination for Kashmir.