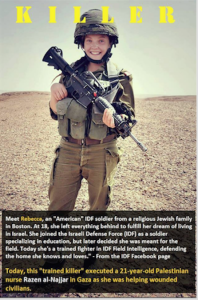 Almost 8,000 people have liked this post & well over 10,000 have shared it from the Freedom for Gaza Facebook wall claiming she is the Israeli sniper who executed Palestinian nurse Razan al-Najjar. In fact, the original 2014 post from the IOF does not make that claim but says she is an intelligence officer. The Israeli army is not going to release the identity of the actual sniper to protect their impunity from prosecution. It does not serve Palestinians to manufacture a story to whip up anger when the facts themselves condemn Israel for genocide. If Freedom for Gaza has reliable evidence that this soldier was the killer, let them show it.