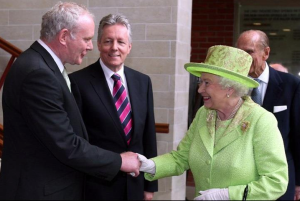 Not just a handshake but a betrayal of the struggle against colonialism: an obituary for Martin McGuinness whose life mocked the Republican anthemic, “Ireland unfree shall never be at peace.”

Martin McGuinness died today at the age of 66. He was the IRA leader of armed struggle who brokered the Good Friday Agreement (GFA) in 1998 with then British Prime Minister Tony Blair. The GFA is credited with ending the “troubles” in Northern Ireland, in ending the armed conflict between the guerrilla branch of the IRA & the British occupying army.

It is one thing to repudiate armed struggle as a bankrupt political strategy to win independence from a colonial power, as a method futile & fatal in advancing reunification between the Irish Republic & the six colonial counties of Northern Ireland. It’s entirely another matter to accept British colonialism in Ireland as a fait accompli, become its representative, & denounce Irish Republicans as “traitors to Ireland” for not giving allegiance to British colonial power & for continuing the struggle for freedom not through guerrilla activity but by organizing a social movement.

The Good Friday Agreement is the Irish rendition of the Oslo Accords for Palestinians: the terms of surrender to colonialism & the abandonment of the anti-colonial struggle. Armed struggle is a dead-end, dead-wrong strategy, often borne from desperation, but it is not an abandonment of freedom principles like the GFA.

Gerry Adams & Martin McGuinness, both former armed struggle leaders, betrayed the Republican struggle against colonialism & went on to make jackasses of themselves by scraping & bowing to Betty Windsor like she was their queen, proceeding from simple-minded groveling to crawling on their bellies like a reptile.

The abandonment of armed struggle was essential to advance reunification but the conditions of colonialism for Catholics in Northern Ireland remain unchanged. As Pádraig Henry Pearse, a Republican activist who led the 1916 Easter Rising, said: “Ireland unfree shall never be at peace.”

These are former posts about McGuinness:

Photo is McGuinness meeting with Betty Windsor in 2012, trying to make groveling look dignified. In November 2016, as then Deputy First Minister of Northern Ireland, McGuinness went on to writing a fawning letter to Trump, reminding him of his Irish ancestry & inviting him for a state visit to the colony.

(Photo by by Paul Faith/Getty Images)