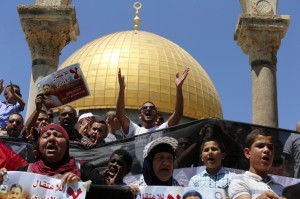 Palestinian protesters near the Al-Aqsa mosque last Friday hold up a placard of political prisoner Mohammed Allan who went into a coma after nine weeks of a hunger strike to protest his illegal incarceration. The Arabic on the placard reads, “No to the detention of Mohammed Allan”.

Allan was arrested last November in the West Bank as an alleged Islamic Jihad activist & placed in administrative detention, which means indefinitely without charges. It’s one of the many barbarisms of the Israeli occupation. His father, Naser Allan, said his son was expecting to be released June 6 & was “crushed” when Israel extended his detention for another six months. Under administrative detention, Israel can go on extending till the cows come home without formal charges. Palestinians have no rights in Israeli prisons. In protest, Allan went on a hunger strike as other Palestinian prisoners have.

When his condition worsened last month, Allan was admitted to Soroka Medical Center in the Israeli city of Beersheba but was recently transferred to the intensive care unit at Barzilai Medical Center in Ashkelon. Under another Israeli barbarism approved July 30th by the Israeli parliament, the prison service can get permission from a judge to force-feed prisoners. This contradicts the Israeli Medical Association (IMA), the UN Human Rights Commission, & the World Medical Association which all consider force-feeding to be torture specifically prohibited under international law.

Lawyers & family members believe Allan was transferred from Soroka to Barzilai because Soroka medical personnel refused to comply with the new law & with a recommendation from Soroka’s ethics committee to treat Allan against his will, including performing blood tests or force-feeding. Two days after the Knesset passed the force-feeding law, Dr. Tamar Karni, head of the IMA’s ethics committee, showed up at Soroka to support the physicians defying the order. Karni later told Israel Radio that “Forcefully feeding him at this stage can kill him. We will not treat our patients forcefully. We are not jailers, we are not torturers.” Of course, the Israel Knesset is following the well-trodden path of the US & Obama regime at Guantanamo by flouting international law opposing force-feeding prisoners.

According to his father, Allan went on the hunger strike because he thought it was “the only way he can win his freedom.” He added that “Force-feeding means premeditated execution of the prisoner. This is a crime, & no doctor will be willing to be involved in that.” Not unless like US doctors involved in Guantanamo, they have political & psychotic affinities with Nazi Dr. Joseph Mengele.

Like the hunger strikers of Northern Ireland under the Thatcher regime, Allan & other hunger strikers are posing a public relations problem for Israel & exposing the barbarism of Israeli apartheid & occupation. If Allan dies in their custody, Israel worries about an international backlash–& should be. His life is clearly of no consequence to them. But it is to us.

Our political response must be to demand the end of arbitrary arrests, the end of the occupation, the end of military aid to Israel. Building the economic, cultural, & academic boycott of Israel is the most powerful solidarity we can express.