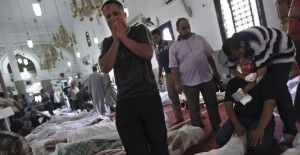 FB prompted me to re-share this post from two years ago. It was written just over a month after Sisi & the military bounced president Morsi & openly took over Egypt. I would write it quite differently today but still stand by my assertion that defending the Muslim Brotherhood against massacres by the Sisi regime was not just the humane & democratic thing to do (regardless of the politics of the MB) but was a defense of the Egyptian revolution.

The military junta had worked with & manipulated the MB leadership under Morsi but turned on the MB to behead the revolution & protect military rule. Bloodbaths are not the method of social transformation but of tyranny. That distinction is never going to change.

A propaganda war is on to justify the massacres & brutal military siege against the Muslim Brotherhood (MB) in Egypt. How anyone who claims to stand for democracy & social transformation can defend these barbarities is one of the unfathomable enigmas of politics. (And that would be giving defense of barbarism its most charitable twist.) What is happening is a political process separating the wheat from the chaff in revolution & the revolutionist from the Islamophobe.

It is one thing to denounce the torching of Christian churches. One can even allege with some certainty that the MB was involved–although given the military siege & the use of divide & conquer by the regime, it is likely agents provocateurs from SCAF, the US Pentagon, CIA, & Mossad are also implicated. All that would have been sorted out in a court of law if the military regime allowed the rule of law.

It is another thing entirely to ignore the massacre of hundreds of unarmed MB civilians & focus reporting on denouncing the torching of police stations & writing sentimental obituaries for the riot cops & soldiers getting caught in the crossfires of the carnage they are creating. That kind of reporting is a dead giveaway to whose side you are on & it typifies the coverage on the Facebook wall of Egyptian Streets.

Media are already using the massacres to beat the drums of Islamophobia. Cynics will use the carnage to document their conviction social transformation is impossible against the mighty fortress of US & Egyptian militarism. Revolutionists will not wait for the tear gas & the horror to dissipate before examining with the most careful attention & closest approximations how the counterrevolution gained the upper hand in Egypt.

One thing is already certain: regime change is an insufficient program for social transformation; the military runs the show in Egypt & they must eventually be forcibly challenged & dismantled down to the last bullet & tear gas canister. A full program that incorporates that monumental task & addresses the political, social, & economic problems of Egyptian working people must be developed.

Egyptian working people have been a beacon of revolution over the past few years; activists around the world have learned much from observing their struggles & their stand against what seemed insurmountable odds. Their leadership was forged in the cauldron of revolution & did not have sufficient time & resources to develop an action program to successfully challenge the military junta—which was armed to the teeth by the US Pentagon.

Supporters of the Egyptian military siege use guilt-baiting & call those outside Egypt know-it-alls for taking a stand against the massacres of MB civilians. They suggest only an Orientalist would take a stand against bloodbaths. It’s takes a whole lot more than name-calling & guilt-baiting to silence the international voices of outrage at the crimes of the Egyptian military regime & their Pentagon & Zionist allies.