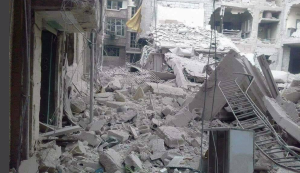 The Yarmouk Palestinian refugee camp south of Damascus has been under extreme Syrian & Russian aerial bombardment for a few weeks. Assad propagandists Bartlett & Beeley are busy vilifying the White Helmets & defending themselves against charges as hired propagandists but they took time out to claim Yarmouk is being bombed because it is a hotbed of Al Qaeda & ISIS. Yes, it’s true those forces are holed up in Yarmouk but there are also thousands of Palestinian refugees living there. It is a war crime to bomb civilians even if Al Qaeda & ISIS are hiding among them. One shouldn’t have to explain why that is a war crime. But Assad’s little Beavis & Butthead duo just lie to justify bombing Yarmouk to smithereens. They both suck off Palestinian solidarity to give them political cachet but when it comes to defending Palestinian refugees in Syria, they are all vilification & deceit.

Stand with Palestinian refugees in Syria & with the Syrian people & demand the immediate cessation of bombing & the immediate, unconditional withdrawal of all foreign military forces from Syria.

(Photo of Yarmouk as it is now from several media sources)